As part of the project I wanted to use the networking features of the Raspberry Pi Zero W to enable it to stream internet radio as well as the possibility of playing mp3 files from a network share.

The Zero is only a single core CPU as opposed to the Pi 3 which is quad core, also the memory is 512MB not the 1GB of the Pi 3. This means the computational resources are less but still capable.

As I will be using various display boards and controllers attached via the GPIO header I didn't need the full Pixel desktop graphics. This mean't the board would be configured to be a headless node with SSH access.

After creating a SD card with the operating system to which their are plenty guides I updated the the OS to ensure I was using the latest version.

I also configured Pi to boot into command line and enabled SSH, not forgetting to change the default password. Finally I enabled the I2C interface which is required for the MicroDot Phat, OLED display and the RTC I am going to use.

Configuring the HATs and hardware

There are a number of HATS (or Bonnets) that I'm using along with some additional hardware, these require some libraries to get them working. There are plenty of examples vendors websites and on the Internet, however some pointers.


Using the Adafruit DS3231 Precision RTC Breakout as the RTC in this project. Installation instructions can be found on their website "Adding a Real Time Clock to Raspberry Pi"

The main steps for configuration are

Should show and entry for 0x68

Once you have the Kernel driver running, i2cdetect will skip over 0x68 and display UU

You can add support for the RTC by adding a device tree overlay. Run the following command

Add dtoverlay=i2c-rtc,ds3231 to the end of the file/ Save it and run sudo reboot to start again.


There is an excellent getting started tutorial for the Micro Dot pHAT  tutorial on the Pimoroni website (https://learn.pimoroni.com/tutorial/sandyj/getting-started-with-micro-dot-phat)

The software library is available at https://github.com/pimoroni/microdot-phat however they provided an excellent install script. Open a new terminal, and type the following, making sure to type 'y' or 'n' when prompted:


Adafruit provide an excellent range of support material and there is a Adafruit tutorial for the Stereo bonnet (https://learn.adafruit.com/adafruit-speaker-bonnet-for-raspberry-pi). Again there is a good install script, open a new terminal, and type the following, making sure to type 'y' or 'n' when prompted:


The display is a more traditional process for installation and for this project as the board is less of a mainstream manufacturers device I went for Luma OLED library and as it worked I'm sticking with it for this project. Open a new terminal, and type the following


There are a lot of choices for playing sound files and streaming audio, I use two players.


I went for a wll established play the MPG123 which had a number of features that made it attractive and it worked so didn't go looking for the perfect player. to install ,pg125 open a new terminal, and type the following

The big problem with the sound HAT I used and the sound utilities is that is difficult to software control the volume. In order to get volume control working I had to configure a volume controller.

To do this I needed to create a new softvol device, using speakerphat as device name and Master as the control name. Using Master as sound card does not have a master volume control

To determine if name has been used for an existing control already, it shouldn't exist if you are following these instructions I check for any existing audio controls using the following.

As it didn't find a control called Master it made following some of the available tutorials a bit easier. What I found I had to do to get this all worming was to create some configuration files.

After which it was possible to use amixer to set the volume of the play back.


In addition to the above software I also installed some additional components that could be helpful in later additions of the devices.

As part of the software to drive this I'm considering a web based GUI to enable easier setting of alarms and editing playlists. To that end I have installed a lightweight database and web server

I have gone for SQLITE3, Lighttpd, and PHP5 again there are a lot of tutorials on the installation and use of this combination of software on the internet.


To configure Lighttpd to support Python as a CGI language the lighttpd.conf needs to be updated to include the cgi module. This requires the following entry into the lighttpd configuration file (/etc/lighttpd/lighttpd.conf) in the server.modules section

At the end of the configuration file add the following

The cgi-bin directory will need creating in the root of the web server and it will need the correct permissions.

That about wraps doing the basic configuration of the Pi Zero W and the hardware.

Posted by GeraintPhotography at 17:48 No comments:

A very short note on how to make a Raspberry Pi Zero 1.3 USB gadget. These are steps and websites that helped get mine working.

The hardware installation is easy to do, just need a fine tip to your soldering iron. The software was straightforward.


Don't forget to share your host Ethernet connection with the Pi if you want it to access the network. 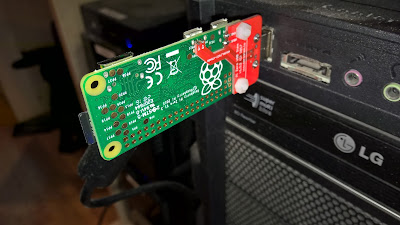 Posted by GeraintPhotography at 16:16 No comments:

As part of a project to develop my electronic and programming skills plus need an alarm clock I decided to build one from scratch using a Raspberry Pi.

My initial wish list was for it do the following


The feature keeps on growing as I have further ideas and inspirations, the current feature list is as follows.


My ideas for the simple control was to have a single press button to select various modes, a multi-function button using a rotary encode with a combined push button and a large illuminating push button for the alarm off.

For the time display the Pimoroni microdot phat caught my as interesting display and I decided to incorporate that as a time display mimicking a lot of clocks.

As with all good projects I should of looked at more options for the hardware especially consider the later functionality I came up with.

For a sound option I decided on the Adafruit I2S 3W Stereo Speaker Bonnet for Raspberry Pi with their Stereo Enclosed Speaker Set.

This all came together as a prototype hardware rig on my workbench. 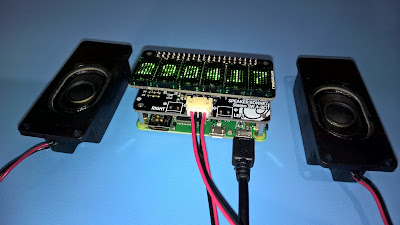 One of the advantages of the Raspberry Pi and the ecosphere that has built up around it and the other micro-controller boards like the Arduino is that you can stack the shields to use the different functionality as long as there are no clashes with the pins being used or the addresses of devices being used.

For adding the control devices I need to wiring in the switches to the GPIO pins on the Raspberry Pi, although the Stereo bonnet has a row of plated holes replicating the GPIO pins it could become expensive if I needed to chop and change the wiring around. I went for the Adafruit Proto bonnet as a means of connecting the various controls.

One of the additional features I decided to include was to show a weather symbol on a OLED display to indicate the current days forecast.The current hardware design is show in the wiring diagram

The final prototype hardware is showing below
The hardware interfaces are the default ones for the devices with a selection of GPIO pins for the switches that don't clash.


I will be launching a Sourceforge page with details of the project and software as it is developed.

In the part 2 I will be looking at the basic configuration of the Raspberry Pi and the libraries need to drive all the hardware.

Posted by GeraintPhotography at 11:04 No comments: