This article is aimed at those implementing the PCI DSS v3.1 requirements and those conducting audits to ensure an organisation is compliant. It aims to provide some background around the issues, how encryption is incorporated with the standard and how it can be audited.

With recent vulnerabilities in SSL and TLS along with vulnerabilities in RC4, the PCI SSC has upped the boundary where strong cryptography can be considered to start. With PCI DSS v3.1 it has removed SSL and early TLS from new implementations and for existing implementation they must be removed by June 30th, 2016. For POS POI devices and the SSL/TLS endpoints, this can be done as long as they can be verified as not being susceptible to SSL/TLS exploits. For existing implementations using SSL and early TLS there must be a formal Risk Mitigation and Migration Plan in place. The PCI SSC have published guidance on migrating from SSL and Early TLS.

The use of RC4 in all versions of TLS is prohibited by RFC 7465 due to attacks on the algorithm that weaken or break it. RFC 7465 is an Internet Engineering Taskforce document published in Feb 2015, which outlines the changes to TLS that should be implemented to remove the use of RC4.

In additional to the 3 requirements listed in the guidance notes from the PCI SSC (highlighted in grey below) there are some additional requirements that involve strong cryptography in the PCI DSS.

For existing implementations of SSL and early TLS when be audited they would need to include the usage under insecure protocols in requirement 1.1.6 and include a business justification for its usage.

If SSL and early TLS is being used, it should be configured to reduce the risk of being exploited and these additional measures should be covered under requirement 2.2.3

Requirement 8.2.1 again strong TLS should be used if not similar controls to those for requirement 2.3 and 2.4 should be in place.

If a HTTPS based connection is used than the strength of the connection can be determined through a browser. Browser’s these days present security information about the connections, although different browsers do it different ways. With Firefox it is easier to determine the encryption strength as shown in the screenshot below. 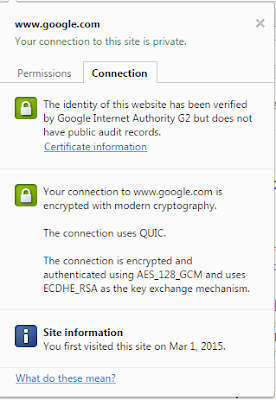 With Internet explorer using the menu and file properties the encryption properties of the currently selected tab can be viewed. Additionally the server certificate can be viewed, along with the trust chain. 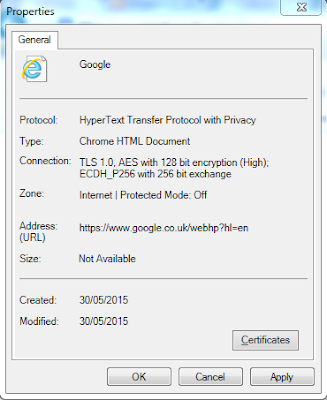 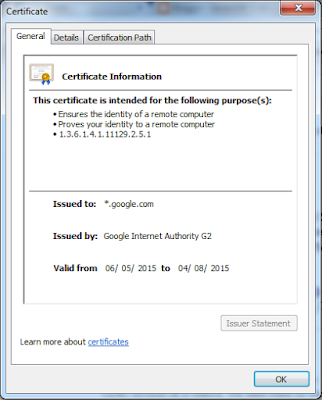 If you examining the validity period of the Google certificate, you will notice it is only valid between May 6th, 2015 and Aug 4th 2015. Whilst this is a short period it demonstrates a point that security professionals and cryptologists understand is that the more frequent a key is used the increased chances of statistically analysis determining something useful about the key, which will help with break it. With hybrid cryptographic systems such as TLS and SSH, they use the public/private asymmetric encryption to dynamically generate a symmetric secret key for encrypting the data stream used to protect the information exchanged.

The PCI DSS standard v3.1 has a number of requirements involving the life-cycle of cryptographic keys and these will apply to digital certificates as well as any other form of encryption.

To cover the requirements listed above there will need to be suitable policies, procedures, standards, baselines and guidelines in place.

The cryptoperiod for a site with extremely high levels of traffic will have a shorter validity period than one with minimal amount of traffic. NIST produce a guideline on cryptoperiod which is mentioned in the PCI DSS standard.

Certificates can have a defined key usage field that defines the activities the certificate can be used for; it could indicate that the key should be used for signatures but not for encipherment. The correct certificate must in place on the server.

VeriSign and other bodies use classes of certificates to determine the level of authentication they use to verify the identity of the organisation requesting the certificate.
Checking for class 1 is done by simply checking if the requester responds to the email address the certificate is for, this level of checking is not suitable for an ecommerce operation.

Within the EU there is an EU Directive 1999/93/EC on "a Community framework for electronic signatures" which defines the term qualified certificate and the requirements an issuer must meet to issue such a certificate.

There are a lots of documents describing best practice for digital or X.509 certificates that are either vendor or platform dependent. The recommendation is to find the relevant best practice for the platform and infrastructure you are operating.

In addition to examining a certificate using the tools within browsers it is possible to download the certificate and use tools such as openSSL to display all the fields of the certificate. The following command is an example of how to output the certificate in a readable form. The certificate will need to be in a suitable form such as .pem or 64base encoded .cer if exported through windows operating system.

In addition to the certificates installed, a server will support a range of cipher suites that support various combinations of encryption algorithms and key lengths to exchange keys, protect data streams, and provide integrity, non-repudiation functionality.

There are a number of naming conventions in use for cipher suites, the most common format is that based on openSSL naming convention that defines the encryption for the four basic functions of a cipher suite.
An example of this would be DHE-RSA-AES256-SHA which breaks down to the following.
For PCI DSS compliance the server should only support cipher/key length combination considered to be strong for it to meet the requirements.

When clients connect to servers as part of the negotiation they decide on which ciphers to use and exchange keys. The cipher has to be common on both devices and as an organisation operate a server they generally don’t control of what is installed on clients and have a range of ciphers installed.

As a cryptologist/security professional should understand the negotiation does not go for the strongest cipher as there is considerable computational overhead in strong ciphers and long key lengths but often selects the weakest common denominator. Therefore to force strong cryptography the server should only have strong ciphers installed.

Tools such as Nessus, sslscan, ssltest can list the installed cipher suites and ssltest (operated by Qualys SSL Labs) can give a rating to the security of the server certificate and installed ciphers.

Scanning tools can determine the set-up of SSL/TLS and the features that have been enabled, the exposure to currently known vulnerabilities, the installed ciphers and the preferred ciphers. The output of the tools does need to be interpreted by security professionals who understand cryptography.

For compliance testing there is a need to demonstrate that strong cryptography which renders all authentication credentials (such as passwords/phrases) and card data unreadable during transmission is proved.

As requirement is to ensure that secure channel is created before the information is exchanged the definitive method will be to use a packet sniffer and look at the communication session being created and ensure a secure channel was created and the data is not being transmitted in cleartest.
In order not to affect either the server or client and ensure that the transmitted packets are being monitored, a network tap or the span or mirrored port on a switch can be used to monitor the communication as shown.

The packet sniffer is isolated from the endpoints, it can’t give a false positive by reading packets before they have been encrypted which is a possibility if the packet sniffing software was installed on an endpoint. 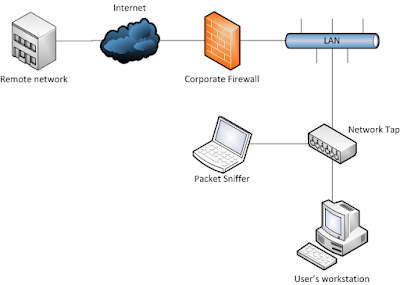 The network tap or switch configured to span or mirror a port can be used to monitor the traffic between endpoints, the packet sniffer will pick up all traffic passing over the monitored connection and will need filtering to remove the frames and packets not relevant to the testing.
Using tools such as tcpdump, wireshark and network forensic analysis tools can help an auditor to accurately determine in the connection and the date being transferred is securely encrypted.

SSL Server Test is a free online service operated by Qualys SSL Labs that performs a deep analysis of the configuration of any SSL web server on the public Internet.
https://www.ssllabs.com/ssltest/

SSLScan queries SSL services, such as HTTPS, in order to determine the ciphers that are supported. SSLScan is designed to be easy, lean and fast. The output includes preferred ciphers of the SSL service, the certificate and is in Text and XML formats.
http://sourceforge.net/projects/sslscan/

Wireshark is a network protocol analyzer for Unix and Windows.
https://www.wireshark.org/