In this post I am aiming to explaining some of the common terms (such as attack vector, attack surface area) used when discussing cyber attacks in the way non-technical people can understand. In this post I'm using an example of a malicious PDF attack to explain the terms.

The scenario is an attacker sends an email with an attachment that is a malicious PDF the contains executable code if viewed on Adobe Reader, in this scenario the code will cause a denial of service.

The attacker will create a malicious payload in this scenario it is a PDF file that contains code that will take advantage of (exploit) the discovered vulnerability in a number of Adobe products. The PDF file is attached to an email which is then sent to the victim (could be a known individual in a targeted attack or to a large group of email addresses the attacker has obtained). The recipient would receive the email and the attacker is hoping that the PDF file will be opened by the recipient using a version of one of the affected Adobe products allowing the code to execute and cause a denial of service attack.

For the more technical I have based this on a actual reported vulnerability CVE-2016-1009 which affects Adobe Reader and Acrobat before 11.0.15, Acrobat and Acrobat Reader DC Classic before 15.006.30121, and Acrobat and Acrobat Reader DC Continuous before 15.010.20060 on Windows and OS X and allow attackers to execute arbitrary code or cause a denial of service (memory corruption) via unspecified vectors. [https://www.cvedetails.com/cve/CVE-2016-1009/] [https://helpx.adobe.com/security/products/acrobat/apsb16-09.html]

The scenario is illustrated in the diagram below. 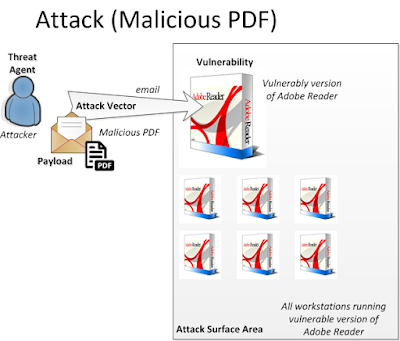 The threat agent, attack, attack vector, vulnerability, exploit and attack surface area relating to this scenario are described in the table below.

Hopefully the scenario and the examples of what the terms mean in the context scenario help explain the usage of the terms by cyber security professionals.

In this scenario to defend themselves the victims need to identify if they are vulnerable and the attack surface area and then implement controls to remediate the vulnerability.

Once a vulnerability has been discovered the attack surface area for that vulnerability can be identified by examining all assets for affected software.

This attack can be remediated by implementing the following


These are covered by the CIS Critical Security Controls


Posted by GeraintPhotography at 12:25 No comments:

In this morning's email were a couple from Amazon, all but one where legitimate. The one that caught my eye was one of those that is "Too good to be true" style phishing attempts.

It was offering a chance of winning £650 of Amazon gift cards.

It has all the classic warning signs of a scam

Below I have run through some simple checks on the email and the originating domain.

The email headers below show the originating server

The domain programnotice.com is registered in Panama as shown below

The email server is based in Netherlands

Whilst none of this is really informative, it is hopefully interesting enough to help people be aware of the risk from emails.

Posted by GeraintPhotography at 10:19 No comments:

Email ThisBlogThis!Share to TwitterShare to FacebookShare to Pinterest
Labels: phishing

In the wake of the Brexit vote and the result for the leave campaign they has been an explosion in news reports on the UK and world economy and how companies and the markets are reacting to the vote decision along with stories of racism and harassment of individuals.

As with any news worthy event; and this is ranking at the top end of such events; the ‘proper’ media along with social media has exploded with stories and headlines capturing the eye of the individual. The result is that for the cyber-criminal there is a wealth of material to use to convincing individuals to fall for malware laden emails, drive by downloads and other attacks and both the individual and the employer is at increased risk of loss due to cyber-attack.

The material that is being generated as a result of the Brexit vote is being used as a hook to engage the individuals with the attack and what normally would be considered outlandish and ignored is now being responded to.


Can all be made more believable by referencing stories from or purported to be from the fallout of the Brexit vote. How many of your employees would look at an email reporting to continue information on the relocation of corporate headquarters to another European capital, or would individuals fall for news on the banking struggling to meet foreign currency demands or having sufficient funds to cover cash withdrawals.

Any such emails, news site, social media article could be well meaning or be part of a cyber-attack. Organisations and individuals can protect themselves by ensuring their or they employees are aware of the types of attacks and the risks from them.

For the organisation they should establish security frameworks of trust aimed at the employee/personnel level (i.e., specify and train personnel when/where/why/how on how social engineering attacks should be handled).

These frameworks should cover

Posted by GeraintPhotography at 15:58 No comments: